Partners in keeping your workforce working

Drugs tested for include marijuana, cocaine, opiates, amphetamines, phencyclidine (PCP). Specimens may only be tested for the covered drugs and the specimen may not be used to collect any other analysis or test.

Breath Alcohol Testing was developed as an alternative to more invasive types of testing a person for a volume of alcohol consumption. More simply put, it is much easier to obtain a person's breath sample than to perform a blood test or ask a subject to urinate into a cup. Unlike other testing methods, breath alcohol testers provide immediate results, and most importantly, breath alcohol analysis is the only accepted method for alcohol testing for use with DOT Federal Mandated Drug Testing. 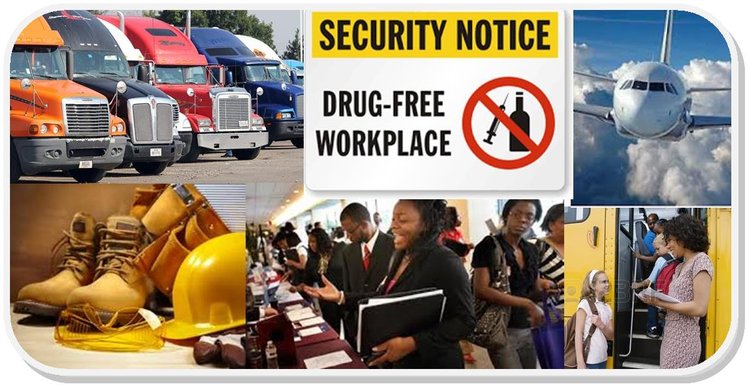 Analysis of hair samples has many advantages as a preliminary screening method for the presence of toxic substances and is now increasingly being used due to a much longer window of detection, which is useful for highly safety-critical positions where there is zero tolerance of drug usage. Even if the person being tested has a shaved head (perhaps in preparation for the test), hair can also be taken from almost any other area of the body. This includes facial hair, the underarms, arms, and legs. There is no known way to adulterate a hair specimen in order to falsify the results of the test, despite what some retailers advertise. Hair testing is not approved by the Department of Health and Human Services Substance Abuse & Mental Health Services Administration (SAMHSA) for use with DOT Federal Mandated Drug Testing.

Saliva/Oral Fluid-based tests can generally detect use during the previous few days. Saliva or oral fluid-based drug tests are becoming more prevalent because of their convenience and the fact that they are very difficult to adulterate. A disadvantage of saliva-based drug testing is that it is not approved by SAMHSA for use with DOT Federal Mandated Drug Testing. Detection of saliva tests begins immediately upon use of marijuana, cocaine, opiates, amphetamines, phencyclidine (PCP).

Urinalysis is one of the most common and genuine methods of testing for steroid use. The sample undergoes a division and two samples are stored. Gas or liquid chromatography are usually the most common among the test procedures. If metabolites, which are the breakdown products of steroids, are then detected, the next step will involve the use of a device known as the mass spectrometer, used in the determination of exactly which types of steroids are in that particular sample. Steroid collections are handled similar to urine collections.

Ethyl Glucuronide (EtG) is a direct metabolite of ethanol alcohol. The presence of EtG in the urine can be used to detect recent alcohol consumption, even after the ethanol alcohol is no longer measurable. Consequently, the presence of EtG in the urine is a definitive indicator that alcohol has been ingested. Traditional laboratory practices typically measure the amount of alcohol present in the body. Depending on the amount of alcohol that has been consumed, this method usually reveals alcohol ingestion within the past few hours. The presence of EtG in the urine, on the other hand, demonstrates that ethanol alcohol was ingested within the past three or four days, or roughly 80 hours after the ethanol alcohol has been metabolized by the body. As a result, it can be determined that a urine alcohol test employing EtG is a more accurate indicator of the recent consumption of alcohol as opposed to simply measuring for the existance of ethanol alcohol. EtG Alcohol testing is not approved by SAMHSA for use with DOT Federal Mandated Drug Testing.